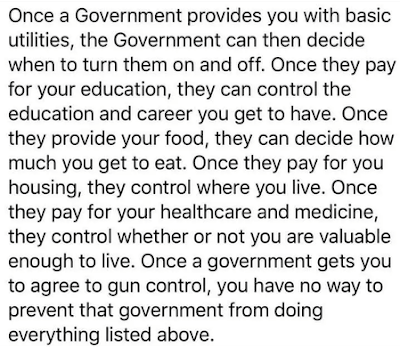 The references below all come from Ammoland.com. The publishers have a great site and is well worth checking in now and again. They publish articles from a variety of authors – including myself. In the past week or so, I’ve found three that are well worth linking to with comments.

Allow me to precede this by saying I am not a lawyer. I have not studied law formally nor have I passed any bar exams  nor have I been admitted by any bar association no have I worked for any lawyer. I am a layman and my opinion is that of a layman. That I feel I must state such grieves me to no end. As a citizen I should have an undeniable right to discuss anything, including legal issues. That said, do not construe any of this as  “legal advice”.

That was for the lawyer assholes. Now for some meat. My understanding of the dictum “Fruit of the poison tree” leads me to believe the ATF’s efforts as described in the above article are all for naught.

They have no authority to gather information on citizens as such. It is literally none of their business who bought what from any dealer. Per their own “blessing”, in and of itself an unnecessary and illegal act, all of those firearms were obtained “legally”. All right, I admit, I hate the very idea of the last statement as I do not believe for a second that any government entity has any business at all saying who can and who cannot buy a firearm. While I do wrestle a bit with the “felon” issue, I wonder if there is a better way to deal with this also.

For now, let’s deal with the whole idea of the AFT seizing and maintaining records of firearm purchases by law abiding citizens.  Trying to maintain an air of diligent innocence, the ATF apparently began scanning and digitizing records of FFA licensees who have gone out of business. One count has the number of records of 54 million. It appears the ATF intends to keep these transactions on record permanently.

While the US Code says the ATF can collect such records ( 18 USC. Section 923(g)(4)), nowhere are they granted permission to scan them into a searchable database and keep them forever. As some Congress critters point out, this creates an entirely unauthorized and blatantly illegal basis for a national gun registry.

Now, back to that bad fruit – if the information is collected and/or stored illegally then the information becomes poisonous. It cannot be used against citizens. Period.

For the record, I do not trust SCOTUS nor Congress to do the right thing should such a case come up. Too often both act in the interests of an unlimited government rather than acknowledging the limits as laid out in our Constitution. The whole “background check” scheme is exhibit number one. What’s wrong with that? At the very face of things, it sidesteps the presumption of innocence.

Years ago I read of a case, I think it was in Washington State, where a transient was stopped and refused to show his identity. The court ruled in favor of transient. I can no longer find a reference to this case so either I am looking for the wrong thing or I imagined it all. Fast forward to “Terry”.

This court decision opened the doors for what is now commonly referred to as a “Terry Search”.  At the most basic level, the decision pretty much renders the Forth Amendment toothless as it endows law enforcement.

Where a reasonably prudent officer is warranted in the circumstances of a given case in believing that his safety or that of others is endangered, he may make a reasonable search for weapons of the person believed by him to be armed and dangerous

regardless of whether he has probable cause to arrest that individual for crime or the absolute certainty that the individual is armed. Pp. 392 U. S. 20-27.

So, as long as the officer “believes” someone’s safety is in danger, the officer can search a “suspect”.

At the same time, other court decisions holds POLICE HAVE NO DUTY TO PROTECT YOU. Well, isn’t that handy? They have no duty to protect anyone but they can if they want to, even if it means stopping someone in the middle of a public street and searching them.

My primary objection to Terry vs Ohio is the suspect had not committed a crime! At least not any crime that was evident. Yes, he was apparently “illegally” carrying a firearm. (The quotes are included for two reasons. First, the text I read did not specify what, if any, law was actually broken and second, one must question any law that potentially violates “shall not be infringed”.)

In short, there is no presumption of innocence. This brings this entire legal landmine into the realm of “pre-crime”.  I don’t see where planning a crime is automatically illegal. As a fiction writer, I personally reserve the right to plan any crime. It is entirely legal and acceptable to produce stories about crimes, real or imagined. I have never entertained the slightest notion of actually committing any crime nor do I expect to in the future. My musings are for the sole purpose of providing entertainment. Now this brings up yet another factor – research.

If I wanted to write a story about a museum heist, I might very well want to visit a museum. I’d even “case” the place to get an idea of what I might need. I might even walk around the outside looking for weakness in the museum’s security. It is possible I might even be armed. Have I done anything illegal? Probably not. Am I presenting a danger to anyone’s safety? No. Even so, according to Terry vs Ohio, I could be searched, my weapon seized and I’d soon be calling my lawyer.

Sliding back to the ATF – for what purpose are they scanning records into a database? Here, I’d have to agree with the Congress critters, the only reasonable purpose they could have is to create a gun registry. The only reason I can think of to keep a gun registry is so someone would know where to start looking when they want to confiscate someone’s firearms. Whether or not you feel you can justify such actions, to accomplish this one must presume the potential guilt of every citizen in the database. Once again, this flies in the face of a presumption of innocence.

Now for the second instance:

Once again I have to ask, to what end is this activity going? The postal service has no right to spy on anybody. Their authority is limited to enforcing postal fraud and similar laws. And again, they have absolutely no authority and indeed are forbidden by the law of the land to poke around just to see of someone might be breaking the law. There has to be reasonable cause.

Yet another attack comes from the world of personal finance.

I can see some real wrangling and finagling in the works, especially with this last bit. The “poison fruit” disqualification can sometimes be sidestepped if a private entity uncovers the evidence, even by illegal means, rather than law enforcement. How handy. The balance between the rights of individual citizens and the interests of the Republic should favor the individual. This precept is known as “Blackstone’s Ratio”. It is oft quoted and paraphrased, but the original attribute predates the ratification of our Constitution (1788).

As with so much of our Constitution, the law of our land, that is set aside, ignored or outright despised, the principle of presumed innocence is oft discarded even by the Supreme Court of our nation. We citizens cannot accept this.

Among other things, our basic principle of the presumption of innocence is under attack. Warrants ignore constitutional safeguards, government entities sidestep our rights to privacy, private companies are fine with selling our personal information to any bidder and the courts? They just rubber stamp anything “the government” wants. They can no longer be trusted as the guardians of our Constitution.

Our rights, ALL of our rights are God-given. Too often the falsehood is put forth that our rights are only valid when it is convenient for whatever government official at that time. Rather these rights our the cornerstone of our nation. It is the recognition of all citizens having equal rights under the law of the land that we base our society. The simple fact is, if government can “grant” rights, than government can alter or eliminate them. This pretense reflects one of the very first lies told to man – “ye shall be as gods”.