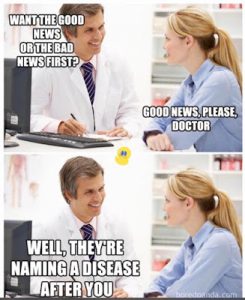 Well, that made me think of another one.

A group of guys got together every Friday night for a poker game. One night, Harvey drew a Royal Flush and promptly keeled over from a heart attack. After the game, the other guys decided someone ought to tell Harvey’s wife. Sid raised his hand. “Harvey was my best friend. I guess I should be the one to tell Miriam”

He shows up at Harvey’s house. It’s 2AM. Miriam opened the door and immediately asks where Harvey is.

“Hmph! For that he should drop dead!”