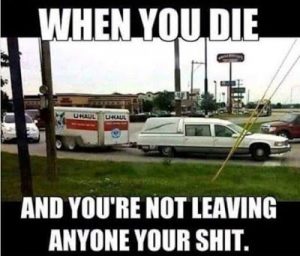 This one made me think of an oldie but goody…

A rich man decided he was going to take at least part of his wealth with him so he gave a million dollars each to his lawyer, his doctor, and his accountant to with instructions to put the money in his casket when he died. He made sure the others knew who else he’d given the same task to. After he passed they gathered at his graveside to say goodbye. The looked at each other not knowing what to day. The lawyer spoke first.

“I know I was supposed to put a million in his casket but I had a bad year last year and I was forced to dip into the cash. I could only put in $10,000.”

The doctor shook his head. “I can’t say I don’t understand. With my divorce and my office being remodeled, not to mention my bride spends money faster than I can overcharge my patients, well, I could only come up with $13,000 myself.”

The accountant looked on the other two with astonishment. “I’m shocked! We are supposed to be professionals! What is the matter with you two? I put in a check for the entire amount!”