For the record, I miss a lot more than I see in FnBook. I don’t spend much time there at all because, well, let’s just say Zuckerberg and I will never be pals. That said, I came across this post today. 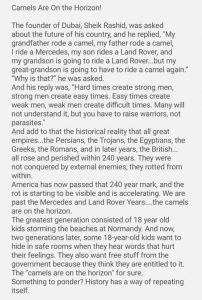 My comment on FnB is below. I’m reposting it here as it will soon be buried in those pages IF it is not “fact-checked” out of existence. I suspect the latter is more likely. I will update this post should that happen. In any case I’m reposting here as I feel it needs to be said.

I hate to say it but I’d say our generation is the generation of weak men. How else can we explain these things we see and yet allow to happen? Absolutely corrupt politicians thumbing their noses at us, whiney brats forcing grown adults to their knees, mask mandates, vax mandates, the list goes on.

Remember when Hillary Clinton carpetbagged her way to NY to become our U.S. Senator? Why, in a state with over 7 million people did some find it necessary to import someone to represent us? Why was it, the NY GOP could not stand up a solid citizen to oppose her, or Chuck Schumer or Kirsten Gillibrand?

In my own adopted state, how can we seat the likes of Mark Warner and Tim “lap dog” Kaine? As citizens, weak citizens, we’ve stepped aside and allowed the politicians to control the process.

And here we are. One can argue we are not weak but merely apathetic. The end result is the same. Like, share and kiss ass all you want but unless we take a stand, unless we do more than wring our hands at the state of affairs, we are all lost.

Not. One. Word. No comments. Nothing. So was I “shadow banned”? Who knows? I might get a notice in a few days telling me how the “fact checkers” determined my post was well, they’ll make up something. Or not. Sigh. This is why I reposted here. Not that anyone will see it but at least I know it is available. Maybe I’ll post a link on Fnbook just for the fun of it. For some reason, I think links get less attention.